All you alumni from Beginner's Writers Workshop with our favorite teacher Ann, please go to her site (in the favorite blog column at the right) and drop her a message. She'd like to know what y'all have been up to.

Why you're at it, jump in one of the discussions and leave a bit of your writing behind.

Another cyber friend, Linda McMaken, has published a book, "The Three Baers, Book One: Baer Truth". Like my last review of Linda Yezak's Book "Give The Lady A Ride" this is a modern day Cowboy romance. And like Linda Y, Linda Mc's (confused yet) characters are well defined and lovable, in fact I'm in love with Tessa, when you read it you'll figure out why. There are several laugh out loud parts, which come at unexpected times, a very enjoyable read. It is the first of a trilogy about three brothers, which has it's twist in itself, the oldest, Joe, is the hero in this one. This is Linda's first book, but she has written articles for several magazines, she the Senior News Editor for Reader's Entertainment News, Senior Media Marketing Manager, and scriptwriter for COS Productions, and she also has a blog which you can click on over on the right in my blog list.

He awoke to the smell of stale cigarette smoke and pickled herring. He immediately lost all bile that was in his stomach, causing his head to fill with pain. "That's it," he thought, "I finally made it to hell." He tried opening his eyes, but all that was there was darkness. He searched for any small trace of light that might indicate a door or window, but all he saw was darkness. "I'm blind." he said out loud, the sound of his voice made him jump. He felt around and came to the conclusion that his room was about six feet wide and 10 feet long. What he thought was the door was in the middle of one of the six foot walls, but no hinges, or no door knob. He felt the crease in his forehead, it was still moist, slowly oozing blood and sweat. He put his back again the wall opposite the door and sat down. "It's another fine mess you've gotten me into Stanley."

The sudden screech of an eagle over loud speakers caused him to jump to his feet. He immediately fell to his knees as he became light headed because of his head wound. Lights flashed on and off, her laughter boomed, echoing off the wall, then the worst came as she started playing Lady Gaga. He put his hands over his ears but the noise was just too loud. Then her voice came boomed, "Give it to me. Give it to me," over and over and over.

"No! You'll never get it. Never," he yelled at the top of his lungs. The noise stopped immediately and the door cracked open. She stood there with his Glock in her hand, up to the temple of his best friend.

"Give it to me. This piece of trash is all that cares for you. Are you going to give that up for it?"

He stood there looking into the two pairs of eyes. One full of hope, one full of hatred. "Ok, you win. I put it next to your collection of Bibles, I knew you'd never find it there."

"It had better be there, or I'll hunt you down and next time I won't just graze you." She threw him his gun, "It's not loaded anyway." She laughed all the way out the room, and headed straight to her study. After moving a dusty pile of Bibles, she saw it, "That clever SOB, I'd never would have looked for it two feet from my desk." She slowly picked it up and ran her hand over it. The hairs on her arms stood on end as her excitement climaxed. "Finally, my very own copy of Pee Wee Herman's Big Adventure."
Posted by Walk at 4:12 PM 4 comments:

A Long Dark Highway - Smoke If You Have Them

The tire smoke looked all convoluted through the broken windshield, but the smell left no doubt that the tires did their job and shut the Mustang down. "Glad it's a rental." he thought as he pushed the door open. He stood on the bridge, and scratched his head. The sign said "Bridge Out" but it's not, it spans the creek perfectly. That feeling came back to him, his "Spidey Sense", and the hair stood up on his neck again. He reached for the Glock but then remembered he put it in the seat next to him.

He turned and started to run for the car, he just about made it before the shot rang out and the bullet put a crease in his forehead. As the dawn turned to dusk, and dusk to dark he hears her laughter ringing in his ears. His last thought was that now she would never get what she wanted most in the world. 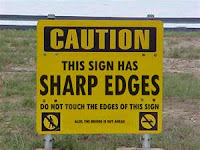 "You are so cute, trying to act all tough and such. You'll give it to me, you know I'll find you wherever you try to hide. I found you here, I'll find you there." She looked out the window at the sun peeking over the horizon, "Looks, like another beautiful sunrise."

I slowly moved my left hand around to my Glock, yeah, it's not my gun hand but at this distance I don't think I could miss.

"Leave the gun alone, Romeo, you'll never get a shot off." The hair on my neck bristled, I could feel my blood pressure rise, I slid out of the booth, threw a twenty on the counter and without a word, walk out, sounds of her laughter echoing between my ears.

Gravel flew as I hit the pavement. I headed back the way I came, headed back to the only home I have ever knew. Once there, she would be on my turf, on my terms, it was going to end my way.

I never saw the "BRIDGE OUT" sign until I hit it.