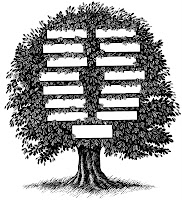 I've had a request for information regarding my grandfather and grandmother and who their children was etc, etc. Genealogy research, research of those who gone before us. What I wonder is what is the big deal? Is somehow knowing where I came from determine where I'm going? Am I on a course to repeat the course that someone set before me hundreds of years ago? Who I am is a result of who they were, at least physically, perhaps mentally. But what about spiritually? Is who they were guide me to the point of decision when I have to make up my mind about Jesus, did the way they lived their lives point me to him? Yes and no. Unbelief points you no where, where belief points you to eternal life in Christ Jesus. Unbelief also points to eternal life, but not the kind you want. Unbelief points you on the path the Hell and eternity there can't be described by any pain felt here on earth. Belief points to eternal life with Jesus, worshiping Him in Heaven, where there is streets of gold, a mansion built just for me, and eternal light that drives every shadow out.

I hope that I point my family towards the Light and not the dark. I hope that my life will be remembered in a hundred years as one who blessed his grandkids grandkids by the life he lead and passed on to those who came after me. Maybe looking at the past might be a good thing, it lets you look at where you've been and where you're going and determine where to correct the course.
Posted by Walk at 3:14 PM No comments:

George Carlin's death filled the news today, so this entry is for him. I don't know what his relationship with Jesus was, but I can imagine by his routine. So, for George:

She adjusted her pearls in the mirror as the sounds of her family gathering below flowed over her like the smell of her favorite perfume. It’s been so long since we’ve been together, she thought, now everyone is home. She tugged at her blouse one last time and turned to go downstairs to join the family. Standing in the door watching her was Jed Delaney, her sweet Jed, her beloved husband of over twenty-five years.

“Martha, you look radiant as usual,” Jed said as he took her hand, “the gang’s all here, are you ready?”

“Yes, darling,” she said as she pecked him on the cheek.They descended the stairs into the front parlor, a crackling fire welcoming them.

At the bottom step waiting on them was their oldest son, Michael, who had arrived just a few moments before. Michael grabbed Martha and gave her a big bear hug, “Mom, it is so good to see you and dad, I’ve missed you so much.”Beside Michael was Jackie O, as they called her, a nice Irish girl named Jaclyn Katharine O’Reily before she became Michael’s bride and mother to their two sons, Matthew and Mark, and yes, they are working on Luke and John.

Mary Beth, the only daughter, sat in the overstuffed leather wing chair, looking like the princess she was. As her mother approached, she rose and they embraced, communicating as only a mother and daughter could. Mary Beth hooked her arms through Martha’s and they turned toward Ross.

Ross was the baby of the family and Martha mothered over him as he grew up. Often Martha refused to let him join in with his friends, “They’re such a rowdy bunch,” but Ross never really would mind as he knew Martha would make it up to him somehow.Martha walked over to Ross and adjusted his tie, “A man in uniform can’t have a crooked tie,” she said. “You look so handsome in your dress blues.” She reached down and put a letter in his hand. “You can read it later, it’s just mushy mom stuff.” She looked at Mary Beth and together they straightened the flag that draped Ross’ coffin, Martha looked back at Ross. “Welcome home baby boy, now the family is all together once again.”
Posted by Walk at 10:33 AM No comments:

Monkey In My Hair

What I'm about to tell is true, I swear
About the monkey that stole my hair
It was a pet of a quaint millionaire
Whose head was shiny bare
The monkey tied me to a chair
Which caught me totally unaware
He pulled out the clippers and began this sad affair
While a polar bear played solitaire
But I really must declare
This affair wasn't totally unfair
For this haircut made me look so debonair
Well, now you can tell I ain't no Voltaire
Posted by Walk at 3:08 PM No comments:

I wear a badge. Not a badge of authority but a badge of honor. They badge I so proudly wear is my name. I'm not proud of meaning or who might have worn it in centuries past, but I'm proud of it because of the man who gave it to me, my father. I look back at the lessons he taught me, work ethic, not to talk just to be talking (some say we're "Quiet Men"), love of family and friends, and much, much more.'' My mother calls me "The Chip" and calls dad "Old Block", another badge of honor.

His steps have slowed, his eye sight has dimmed, still after 88 years of this earth, he still influences people with his ethics. He rotortilled his garden again this year, he still mows the four acres that their house sits on, after a meal he will get up and wash the dishes.

Thanks dad, you are my hero, alway have been and always will be
Posted by Walk at 1:48 PM No comments: 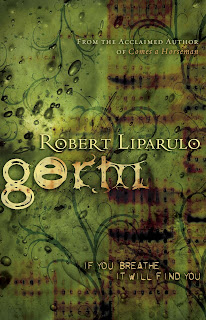 I didn't start this blog as a book review spot, but I decided that if I read a good one, why not blog about it? Who knows, maybe someday somebody will write a review of my book.

Robert Liparulo is one of my new favorite authors, germ, is the second of his books I read, Comes A Horseman was the first. If you like sit on the edge of your chair I can't put this book down stories, then this book is for you. It has the Walk seal of approval on it and I don't give that out just for fun.

Taken from his website, (I hope that's OK Mr. Liparulo):
"Imagine a virus that spreads as a common cold, until it finds a DNA strand that matches the one encoded within it—until it finds the one person it's looking for. Then it turns brutally lethal. No one is safe. If you breathe, it will find you. To prove it, the germ's creator targets ten thousand victims: politicians, housewives, children. Only three people can possibly stop it—if they survive long enough."
My interest was grabbed in the opening and never left until the last word. It is one of those books that make you wonder if it is really fiction or not. The characters are well defined and the books moves from one scene to another effortlessly.

A friend interviewed Mr. Liparulo for her review blog and said how nice a man he was, easy to talk with and just generally a good ole boy. It was by her recommendation that I started reading Mr. Liparulo.

His last book, Deadfall, lies patiently waiting for me to pick it up and start digesting it. I have two other books ahead of it, maybe by the end of the summer I'll have a review of it.
Posted by Walk at 3:28 PM No comments:

I look at this picture
Not color, but black and white,
Of my granny and gramps
Posing with smiles so bright.
Their house in the background,
Their dog not out of their sight.
Granny's a head taller,
Gramps didn't care much about height.
Wearing their sweaters
Buttoned up so tight.
Cane in their hands
Bad legs were their plight.
Eye glasses sitting on their nose
Magnifying their eyes so bright.
One of the last pictures taken
Before Gramps left on his homeward flight.
Leaving Granny alone in their house
Missing her beloved knight
Posted by Walk at 1:57 PM No comments: